A new e-chapbook of mine has been published by proletaria.org in Singapore.

It is a 16 poem e-chapbook written during the first months of the Covid-19 pandemic. The book took two weeks from submitting to completion, so it was something of a record when it comes to speed.

Days blur is a collection of one-line haiku or monoku.  It can be downloaded free here.

For the launch of the book I did a live streamed reading on my facebook page. The film can be seen here.

Call of the page has published a commentary of the book (where I too have submitted commentary on some of the poems). It can be read here.

As I have been told the text was hard to find on the page (you have to scroll down quite a bit, I have also included it below.
Three one-line haiku with commentary from myself, and Anna Maris, the author of ‘days blur’:
drifting clouds the kitchen spider branches out
Anna Maris says:
“This poem could be about the world being in lock-down for humans, but how nature carries on very happily without us. By describing the drifting clouds outside, we are still very clearly confined to the kitchen. So it is of course also about boredom, the ability to simply sit there and watch the spider weaving its web, accepting the way things are or perhaps also inability to care about mundane things like housework.”
I like how we begin with one natural image of clouds drifting by. We can feel the narrator is indoors, inside the kitchen, which is perfectly normal: We like kitchens with a window to the outside world while we drink coffee or prepare a meal. The subtle fact that a spider is branching out does suggest either neglect or confinement or both. I must admit, learning from my Queensland experiences, that it’s handy to have a spider or two create webs to keep the insects down! Pairing ‘drifting clouds’ with ‘the kitchen spider branches out’ is masterful in its juxtaposition of two imageries.
re-learning to knit eyes closed light rain
Anna Maris says:
“Here we have a story about body-memory. How tacit knowledge can be long forgotten by the mind, but still stay in our hands or our senses. It is a poem about re-birth of skills, coming back to simple things in life, taking time to craft, grow and learn instead of running around, over-consuming and forgetting the real value of what is around us. Rain is the sort of undemanding weather, which somehow creates space to do those things that there are usually no time for, but it can also be about transformation, cleansing and renewal.”
The visual rhythm as well as on the tongue when reading out aloud is wonderful and shows a wonderful juxtaposition between the nature image of ‘light rain’ and “re-learning to knit’ even with our eyes closed.
days blur into one another self isolation
Anna Maris says:
“It is hard to explain your own poetry, but when I write something that I am genuinely pleased with (which sadly happens quite seldom), it is as if the creative force is not my own, but an entity of its own that touches me. This poem was a simple observation about the loss of a sense of time, where days blur into one another, but also became a poem about finding another self in isolation, an alter ego, more insightful and better than my usual self. This is the main attraction with one line poetry – the so many ways it can be read.”
I certainly feel dissatisfied with many of my own poems, even if they win awards! I think it’s a common factor amongst poets and other artists, to ever strive ‘forward’ regardless. Confinement is sometimes an excellent tool for a writer, and the unease around the current pandemic, will certainly re-evaluate writers. I like how I can read this various ways:
days blur // into one another self isolation
days blur into one // another self isolation
days blur into one another // self isolation
Writers already write from the inside, ‘their’ inside, their internal thoughts & mechanisms, and internment/confinement/isolation. This has famously been the case down the centuries, creating some stunningly personally wide-open writing. I hope this kind of writing continues to support people in the current pandemic social isolation, as it will with whatever is the next wave of social disruption.
All three one line haiku are working on an invisible thread that weaves its magic over many re-readings.
To see more of Anna’s work from this free ePamphlet collection:
days blur by Anna Maris
https://proletaria730964817.files.wordpress.com/2020/04/days-blur.pdf
Anna Maris
Chair of the literary section of the Swedish Author’s Union, and a board member of the Swedish Haiku Society. Anna is also the founding editor of the haiku journal Blåeld. She has two earlier haiku books, published in Swedish. 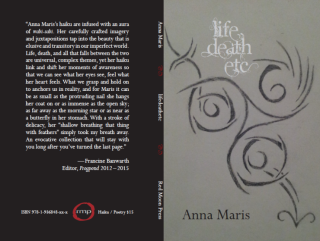 I am a Swedish haiku poet. This blog is about my haiku life. View all posts by Anna Maris